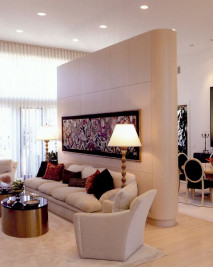 Bill Parker, a native of Arizona, studied interior design at the University of Arizona. After graduation, he began his career with Ethan Allen, Inc., where he received the National Circle of Excellence Award as one of the top 25 Ethan Allen designers across the United States. Bill is certified with the National Council for Interior Design Qualification (NCIDQ), and is a professional member of the American Society of Interior Designers (ASID).

In 1984, Bill opened Parker & Alford Interior Design, Inc., in Tucson, and in 1993 he partnered with Larry N. Deutsch to form the Chicago and Tucson design firm of Deutsch | Parker Design, Ltd. Bill has designed many luxury homes in Chicago, Tucson, Carmel, Coral Gables, Aspen, Albuquerque and Palm Desert. Among his contract and hospitality work, Bill redesigned the interiors for Tucson Country Club, Troon Golf and Country Club in Scottsdale, and he is the retained designer for Westmoreland Country Club in Wilmette, Illinois. Most recently, Bill completed the redesign of guest rooms at the Hacienda del Sol Resort in Tucson.

Bill has served as President of the Arizona South Chapter of the American Society of Interior Designers and was on the National Board of Directors of ASID. Complimenting his professional career, Bill served for nine years on the University of Arizona Dance Advisory Board and currently serves on the University of Arizona Museum of Art Partner’s Board.  Bill maintains homes in both Chicago and Tucson.