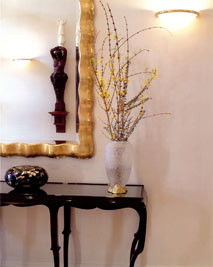 Larry Deutsch moved with his family, at the age of four, to Tucson, Arizona, where he graduated from the University of Arizona with a Bachelor of Fine Arts degree in Art in 1963. Since 1968, he has been a member of the American Society of Interior Designers (ASID). He has been a partner in the Chicago and Tucson firm of Deutsch | Parker Design, Ltd. since 1993.  Prior to 1993 he was president of Larry N. Deutsch Interiors, Ltd. in Chicago.  Larry maintains homes in both Chicago and Tucson.

During his career, Larry has distinguished himself in both residential and commercial design projects, ranging from a 102-foot yacht to the renovation of an historic two-block facility into a combination geriatric center and retirement complex. Among the designs that Larry has created for a diverse national clientele are many apartments and homes in the Chicago area, a luxurious Manhattan apartment, homes from Boca Raton to Beverly Hills, a major brokerage firm in Chicago and most recently he completed the design and renovation of guest rooms at the Hacienda del Sol resort in Tucson.

Larry has held various offices in the Illinois Chapter of ASID. In 1984, he was Chairman of the ASID National Conference in Chicago and in 1986, was Business Chairman of the same conference when held in Los Angeles.